And in a way, they’re right.

You can’t sell directly with social media. At least, not very effectively.

Because it’s like trying to pick up a date at a funeral. Wrong place, wrong time.

It will never convert like Google AdWords, where people show intent by typing in exactly what they’re looking for. And it will never be as effective as a triggered email campaign based on some event, which has been shown to provide a 600% lift over traditional outbound programs (by Gartner, another market research firm).

But that doesn’t mean social media has no impact.

In fact, it can significantly drive revenue in an indirect, hard-to-measure kind of way.

Here are 3 ways in particular that social media can improve your bottom line.

1. The Zero Moment of Truth

You don’t walk in to a dealership blind, forced to negotiate for hours.

After a few minutes Googling, you can find the Kelly Blue Book value for your desired car, the dealer’s profit markup on that exact model, and even individual reviews of the salesmen themselves.

But this isn’t isolated to commodities.

For example, marketing for doctors is now a necessary evil. Because you can use Zagat (which connects with Google+) to rate physicians based on trust, communication, availability, and office environment. This has already happened for Wellpoint and Anthem BlueCross BlueShield members, according to Rheumatologist.org.

This critical first-touch with your brand is dubbed the Zero Moment of Truth by Google. And it’s critical that you have a marketing strategy that will connect with people who are doing this type of proactive research.

Social media is one of the easiest ways to do that, because you can quickly position yourself and give your company visibility that used to cost millions in mass-media advertising. Here’s a perfect example…

Let’s say I’m hungry for pizza, so I go to Google, and here’s what I see: 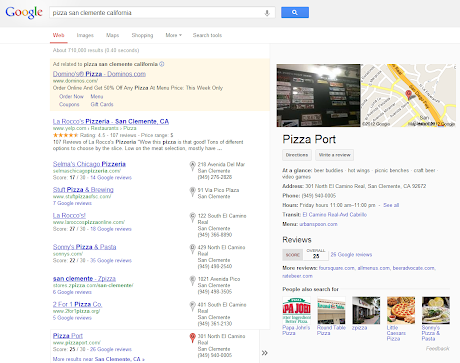 Sure, you recognize some big names. But look at how many small brands there are. Ones you’ve probably never heard of.

In traditional SEO, these brands would NEVER be on the first page for a popular, competitive keyphrase. But look at how Yelp shows up, and how each place has reviews on Google+ (which is one of the few reasons why Google Plus is essential for businesses).

And if you don’t conquer this “zero moment of truth”, then people will just move on to the next company and you’ll never get further consideration.

Engagement is the missing link between getting awareness, and getting sales.

Because at the end of the day, people have to want to do business with you. There’s too many alternatives, and too much competition today.

Seth Godin published Permission Marketing over a decade ago. And it’s simple premise still holds true: marketing is more effective when you first ask for permission to follow-up.

In 2009, software giants HubSpot further extended this philosophy to “inbound marketing”, and have built a large business around helping companies do just that: ask for permission and follow-up.

But the problem with engagement is that it’s hard to measure. That’s why you can’t point to a direct ROI, and large market-research firms report, “social tactics are not meaningful sales drivers”.

So we make up KPI’s instead.

People love to talk about blog comments, and track how many they’re getting per post. But does that really tell you anything? And are those blog commenters really buying anything?

Many times it depends on your industry, business, content topics, and customer segments. Because a blog post about celebrity gossip will ALWAYS get more comments than one about how to use a power tool to improve your deck. (But which one do you think is more likely to lead to sales for the power tool company?)

So go deeper, and see if people are truly engaged with what you’re saying. Are they staying on your site for a couple minutes? Are they viewing multiple pages per visit? Are they clicking the links in your emails? Is your conversion rate above industry averages?

Either way, social media is the perfect channel to improve engagement, because you’re on the front-lines with customers 24/7.

And if there are any roadblocks, then you’ll hear about them, too.

Marketing 101 says it’s MUCH better to focus on existing customers, rather than having to get new ones.

But we obsess over things like traffic, and new Followers, while at the same time neglect things like customer service and systemically following-up.

One of the biggest shifts in the past few years is how you can now buy software. For example, the latest version of Microsoft Office used to set you back several hundred dollars. So you had to pay a huge lump sum up-front, without even knowing if it was any good or not.

But with improvements in technology and distribution, you now have Software as a Service (SaaS), which enables you to log-in anytime, anywhere, on any device, and access your data. And instead of paying one huge lump sum up-front, you only have to pay a tiny fraction each month. In some cases, this can be as low as $5 per month!

Netflix only charges $8 per month for access to a HUGE library of content. That same content cost millions of dollars to produce, and then $20 per person, per viewing to watch it originally. People might have got angry over Netflix’s botched pricing changes a few months ago, but you can’t deny how incredible it is to get acccess to so much value for only $8 per month.

And yet they’re a public company. The biggest in the industry.

How can you survive on only $8 per month?

By focusing on the lifetime value of a customer. If the average customer stays with Netflix on for 36 months, then suddenly that’s a powerful revenue stream.

Social media channels have now made it infinitely easier to connect with people immediately before, during, and after their purchases.

For example, I worked with a client to set-up incentives for people to “check-in” at my client’s physical locations. Then when the customer did, we could set-up systems and processes for employees to follow-up immediately, and strike up a conversation with them in real-time — while they’re still standing in the location. Then the company could also follow-up a day or two later and see how their experience went.

This might not be as glamorous as a million-dollar ad campaign. It takes persistent, discipline, and empathy to pull off.

But customer loyalty can be extremely profitable. Because these are the people who need little motivation, incentives, or flashy marketing campaigns to re-purchase. And they’re the first to recommend you to their friends.