They have millions of Followers, run exciting national campaigns, and generally set the trends for everyone else to follow.

But despite that notoriety, a lot of them still get it wrong.

And they can even learn a few things from their small competitors. 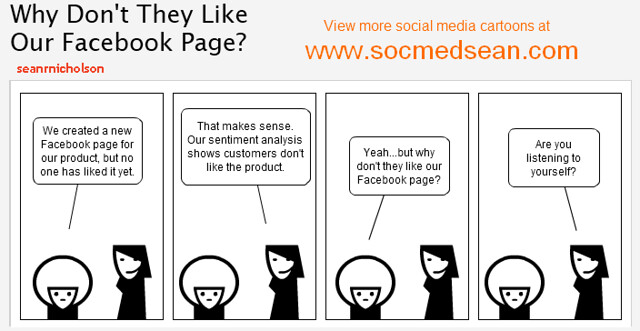 Every business needs a unique voice and personality to stand out today.

This is especially true online. People want to connect with other people, not nameless, faceless companies.

I was at a conference recently, and a panelists was the head of PR for a large, national hospitality company.

She explained how her Legal department has given her a list of acceptable “social media responses”. She (the head of PR!) and her team aren’t allowed to do anything different. If they want to respond to someone’s specific question or concern, then they have to run it by the Legal department first.

This is the exact opposite of how social media works. No potential (or current) customer will feel passionate about a brand that hides behind a list of standard, canned responses.

And by the time someone in PR gets an answer from the Legal department and responds to the customer, they probably forgot they asked a question in the first place.

Bureaucracies and politics kill action. Even getting someone to make a decision can take weeks.

People in large companies need to have more opinions. And they need a leader who can make unpopular decisions. No more consensus. Make a decision and take action.

But be careful who that leader is.

The trouble with this is that typically, the highest paid person in any organization or department doesn’t know anything about social media (or digital marketing for that matter). And when you prioritize

Instead, large companies need to find champions with a history of successes, and who prefer data-driven decisions over political ones.

Social media (and internet marketing) at large companies is easy. Like super easy.

It’s easy to build Twitter Followers and get people to engage with you when your company has been around for decades.

Most “big” business marketers wouldn’t last a day in a small company with no staff, budget, mass-media advertising, or big brand name to save them.

And if they run out of ideas, then they can just hire an ad agency to help them run campaigns or execute new promotions.

But that’s not enough. The way people buy today has fundamentally changed. So you can either accept it and seize this opportunity, or ignore it and blend in with everyone else.

The best example is the Roger Smith Hotel in New York City. How does a small, family-run, independent hotel brand, compete and dominate one of the most competitive markets in the world? Here are a few ways from different interviews:

The point is that social media can’t save your brand. It can enhance it, or detract from it.

But it starts with your DNA, your product or service, and your people.

So if you want to improve your social media presence, then cultivate your culture, improve your service, and hire people that care.