What Jon Stewart & The Daily Show Can Teach You About Branding

Every company talks about a mission statement. But most are worthless and forgettable.

Every company talks about their branding and positioning. But few actually live it.

They may understand the theory behind it, and what good examples look like (i.e. Coca-Cola, Apple, etc.). But when it comes to executing on a daily basis, they fall short.

Mainly because it’s not easy. You must have a singular vision and purpose. Most organizations can’t get everyone on the same page.

But it’s incredibly important. Because if you don’t brand yourself, then people will do it for you — and you may not like what they come up with (i.e. Dell Hell). Or worse, they’ll completely forget you existed.

And here’s the thing…

It doesn’t have to be rocket science. There’s one easy way that always works. And it can help you carve out your own unique positioning so customers remember you.

Here’s the easiest way to stick out in customer’s minds, and build a brand that stands for something.

Jon Stewart started on The Daily Show in 1999, taking over for Craig Kilborn. (For those who don’t know, The Daily Show is a successful political satire show on Comedy Central.)

It’s not easy to step into a successful show and takeover as host. Ask Conan O’Brien.

And being a host is a difficult job. You have to set the tone and steer the ship. Jon Stewart was a stand-up comic on the fringes of television… hardly someone who inspired a lot of confidence at the time.

But he took over the franchise and made the show more popular than ever before. Since taking over, he’s won 16 Emmys for The Daily Show as either a writer or producer.

How did he do it?

How do you keep an engaged audience and community around a show, when people tend to be so fickle and flighty?

He picked an enemy.

How Taking a Stand on National Television Earns You a Brand

At his core, Jon Stewart is a comic. So he follows in the footsteps of comedy greats such as George Carlin, Woody Allen, Lenny Bruce, David Letterman, Steve Martin, and Richard Pryor.

He’s unabashedly liberal, in a Bill Maher-type way (except actually funny and not as pompous). And people generally either love him or hate him.

On October 15th, 2004, Jon Stewart went on the CNN show Crossfire. Instead of providing light, political jokes, he ripped in to the show and host Tucker Carlson. He also criticized the state of traditional television journalism in general.

Here are some highlights: 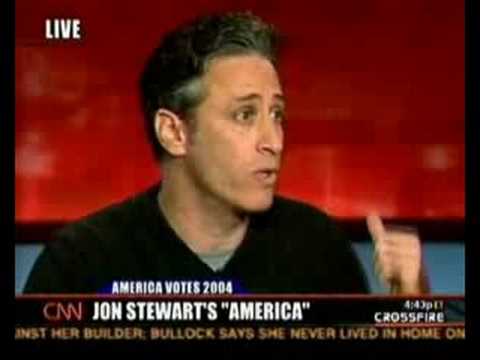 He’s strongly against the way “traditional media” runs (because let’s face it, most of it is terrible). For years he’s been highly critical of other media personalities like CNBC and Fox News.

And by declaring an enemy, he now stands for something.

This is similar to how Steve Jobs hated mediocrity, complexity, average products and… Microsoft.

It’s hard to come up with a tagline for this. But people will know it when they see it.

But having a specific worldview… and then living it day-to-day… you’re able to frame the way people perceive you.

And you can create a brand.

Brand building is one of the most important things you can do to improve your bottom line. How?

Carving out a definable position or strategy isn’t just a nicety — it’s essential to survival and profitability over the long haul.

But here’s the problem…

You (and me) cannot “build a brand” like the big boys.

We haven’t been around for 100+ years. And we don’t have multimillion-dollar ad budgets for creative television spots or celebrity endorsements. (Otherwise you would see much better looking people on my website.)

So for everyone else, brand building is a byproduct. A byproduct of how clients and customers interact with your service or product.

And a byproduct of all the content you create, the partnerships you form, the promotional channels you use, and the emails you send.

But you can’t do all of those things — and skip over into SEO, social media, advertising, email marketing, et al. — without first addressing:

And finally… why should anyone care?

Because today our first marketing objective is to cut through the clutter.

You can do it many different ways. Controversy’s not always bad if it supports your ultimate strategy or goal. Polarization in marketing is actually a good thing.

But what is bad, is vanilla.

Plain, boring, indistinguishable from the rest.

Great brands hate vanilla. They don’t try to please everyone. They have a unique point of view that either resonates (or doesn’t) with everyone else.

And best of all, great brands are more appreciated and better compensated than anyone else.