And there are some who have already purchased from you, and will purchase again in the future.

Getting people to subscribe is one thing. But actually making any money is a different story altogether.

Here’s how you can squeeze more money out of your existing email list. 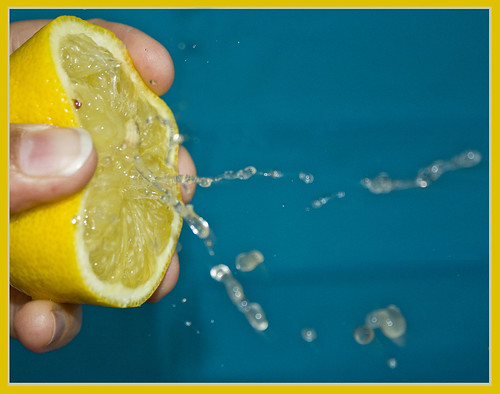 Image courtesy of fluffster
Making money from your email list is all about getting people to the point of conversion. And there are two things that have to happen.

1. Increase the Open Rate: Get more people to actually open and read your email message.

2. Increase the Click-Through-Rate: Get more people to click on your offer and go to a landing page.

Here’s how you do that.

Just to be clear, Opt-out lists are where you automatically have people registered for your email list, and you force them to opt-out. This is considered spam by most people. And it’s illegal in Europe!

Opt-in is where you give people full control whether they want to receive your emails or not. This simple difference has a huge impact on your list’s performance (and it’s a lot more polite).

According to recent data from ClickZ, people that have actively opted in to receive email open and click-through at much higher rates than people that have been added to a list without their knowledge.

How much higher exactly?

People that willing sign up are much more interested in what you have to say. It may take longer, but the results are worth it.

So what are you supposed to do?

Incentivize people to join your list. Give people an immediate, instant-gratification gift that solves a pain point. That could be a free guide, trial, or an exclusive discount.

Then maximize the value you send to increase attentiveness and retention. Don’t talk about yourself, and don’t send thin content or “fluff”. If you don’t have anything to say, then don’t send anything!

Give people a reason to care!

Conversion optimization focuses on one, primary goal. So it’s the same when you’re optimizing Click-Through-Rates.

What is the main goal of your email?

Every element of your design and message should emphasis one primary goal. People don’t have time to read emails. So your goal isn’t to give them information to read in the body of the email. You want them to immediately click through to your landing page.

In this example, the main goal is for people to make a hotel reservation. Once someone is in the hotel, then you can worry about up-selling them on joining your loyalty program, checking out your shows, and eating at your restaurant.

Now obviously I don’t have any data about how either campaign is performing. But after walking through each, you should be able to tell which one has a higher click-through-rate.

I’m also not trying to be derogatory. These real examples provide a great learning experience, and help you visually compare the principles.

So without further ado, here are two lessons in email conversion optimization.

I like Mandalay Bay. It’s a nice hotel, and usually their marketing material is good.

At first blush, it looks really nice. But there’s a few problems with it.

1. Main image obfuscates. The main image looks nice. It captures their brand’s premise, and conveys luxury. However it confuses the email’s message and makes the goal unclear. It’s too large, and takes over your attention, while pushing the primary calls-to-action down the page.

2. Too many call-to-actions. There are way too many calls-to-action. The two for hotel reservations, four social icons, one phone number, one for the new show, and one for the loyalty rewards program. That equals 9 in one email! It should be one or two max!

3. Major call-to-action too small. Again, the major calls-to-action are hotel reservations. Here they’re giving people the “upgrade” option, which is fine. But these are way too small in proportion to the opening image and the rest of the body.

4. Why include social signals? Do you really want someone to leave the email, and go to another company’s website? No way!

This email looks like it was designed by a committee. It seems like they’re trying to incorporate several different points-of-view and make everyone happy. Design-by-committee kills conversions.

Now let’s compare this one to another example.

Here is the Wynn’s recent email campaign I received. 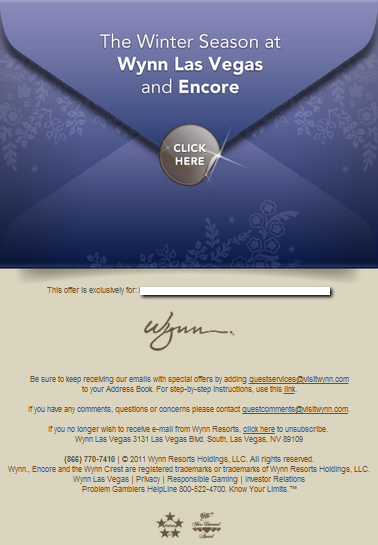 Now, which do you think is performing better?

Email marketing is one of the most profitable online channels.

But after getting people to subscribe, you need to improve your email marketing to increase open rates, and increase click-through-rates.