How to Charge What You’re Worth (No Matter the Economy) 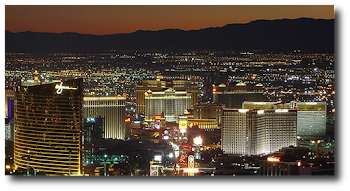 No city was hit harder by the Great Recession than Las Vegas.

They experienced record home foreclosures, where entire neighborhoods sat vacant for months. Unemployment rates are still among the highest in the nation. And the state’s main source of taxation — tourism and gambling — was at an all-time low.

The billion dollar casinos that line the Las Vegas Strip were all struggling to survive. Cash flows were barely positive, because there simply wasn’t enough demand for their hotel rooms, shows, restaurants, and casinos.

And as the average room price fell from $132 per night to under $95, a vicious price war began to try and stay-afloat in this competitive, cut-throat environment.

Every hotel started slashing prices and offering discounts to fill as many rooms as possible. Many operators believed as long as they could get people in the door, they would make up for it in restaurants, casinos, and show tickets.

But they were wrong. And a lot went out of business.

The Vicious Downward Spiral of Discounting

The first thing people do to increase sales when times are tough, is to offer discounts.

It’s easy, and effective… in the short term anyway.

New sales start to trickle in, and you can slowly breath a sigh of relief.

But not for long.

Discounting temporarily stimulates sales by attracting price-conscious consumers to try your product (who otherwise wouldn’t have spent the money), and encourages others who know a bargain when they see it.

Groupon used this model to build a big business (on top of a lot of small businesses). And if you ask any business owner who actually used Groupon, then they were all usually disappointed.

Because price conscious people aren’t loyal to you or your business… they’re only loyal to the lowest price. So if you can’t give it to them the next time around, then they’ll move on to the next competitor.

When you discount to bring in sales, you end up making less revenue per sale. But your costs haven’t necessarily changed, which means you now have lower profit margins.

When you don’t have as much money to cover operating expenses, then you have to start cutting corners.

And that’s what killed hotels on the Las Vegas Strip.

What You Can Learn about Pricing from the Hotel Industry

Walk in to any hotel (especially those on the Strip) and you can immediately notice a difference.

Maybe it smells different, or just feels off.

On the Las Vegas Strip, there are typically three major differences between the nice, luxury hotels, and budget friendly ones.

The only way to generate any profit when you discount is to keep expenses as low as possible. So you understaff and cut corners as much as possible.

Not only that, but hotel companies with low margins usually avoid CAPEX (capital expenditures). These are reinvestments of capital back into the property to improve their product and stay competitive.

Hotels routinely suffer from wear-and-tear. So investing back into your property keeps it nice, which encourages people to come back in the future.

Wynn Las Vegas renovates their rooms every 5 years – no exceptions. And they’re constantly making substantial improvements to the property to better position it for today’s economy and consumer preferences. There’s a reason that their hotel and rooms are the among the best in Las Vegas.

Sure, they discounted during the Great Recession. But they also had larger profit margins, so they could afford to (temporarily).

It’s the little guys at the bottom who were squeezed out of business. Their rates were already so low that they literally discounted themselves into bankruptcy.

But what other alternative did they have?

How do you stay in business without discounting or using low-rates to entice customers in hard times?

The Solution is Better Marketing, Not Discounting

The key to higher pricing is by generating more demand. This goes back to Economics 101 and supply vs. demand.

If you can increase demand for your products or services, then you can hold prices (or raise them accordingly).

And the best way to increase demand is through better marketing (not discounting).

Sure your industry is competitive, or you might live in a small town. But most companies can now sell online. Which means their potential pool of prospects is in the billions.

So your job is to create marketing systems that generate more demand — and more customers — for you on a regular basis.

It doesn’t matter if you’re a solo freelancer, multi-million dollar agency, or a nonprofit looking for funding. Your goal is still to generate more demand.

Online, these marketing systems should work together so you can get traffic, turn traffic into leads, and then get leads to purchase on a regular basis.

Unfortunately, that’s where most people fail…

If you want to learn how to create more inbound demand for your company, then let’s set-up a time to talk about your business.