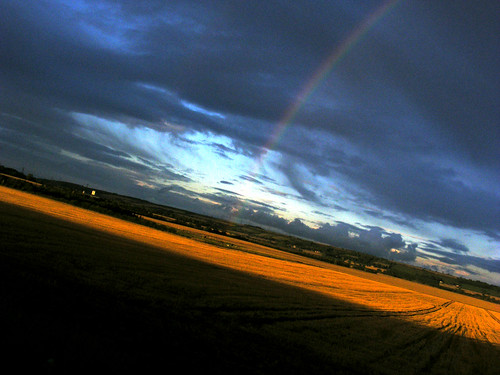 Farming takes a lot of planning, discipline, and you have to wait a few months before the crops are ready for harvest. It’s not glamorous or eventful. It’s easy to get bored. And you have to keep at it — day after day, month after month, year after year — if you want to see your profits soar.

But with rainbows, there’s always the chance for a pot of gold at the end of the line. You don’t need to plan (or even think), because you can just follow the mirage in front of you. So you just run and run and run. It’s exciting. It’s thrilling. And if you can just run a little faster, then it will only take a few hours of work to get rich quick!

If only that were true…

Rainbows are fallacies. They sound nice, the beginning looks bright, but there’s no payoff at the end of the road.

And most often, the risk is not worth it. You squander time and money that should have been spent on planning and coordinating the next harvest.

Everyday, a new rainbow pops up in digital marketing. A bright, shiny new object that sounds fun to chase. There’s buzz and chatter around it. It’s all the rage.

But in most cases, you should ignore it, keep your head down, and stick to your guns. Here’s why.

RIP RSS: The Promising Technology That Never Took Off

And with the closure, a stake will be firmly implanted in the heart of RSS.

Rich Site Summary (RSS) was originally created in to help frequently updated content — like blogs — distribute easily and automatically through “readers” and other content viewing clients.

The first version of RSS has actually been around for over a decade. But it’s adoption was always slow and cumbersome.

There are a few reasons for this. But mainly, it’s difficult to change people’s behavior patterns. That’s why most promising technologies or innovations don’t cross the chasm.

Besides low mainstream adoption, RSS usage has also declined due to new publishing and distribution alternatives like Twitter.

RSS as a technology still has use. For example, many of you are reading this as an email (even though it’s a blog post) because I use an RSS feed to push the content into a new email campaign. Sneaky sneaky! 🙂

But as a distribution and customer acquisition channel, it’s time is up. So people with large audiences built on Feedburner or others are in grave danger of digital sharecropping.

Why QR Codes Are Pointless (And Slightly Annoying)

I don’t like making technology predictions, because it’s nearly impossible to say what’s going to happen in such a dynamic world that’s changes 24/7/365.

But I’m not very bullish on QR codes.

At first blush, the future looks bright. The macro digital marketing trend of Social, Local and Mobile (“SoLoMo”) is heating up.

But the user experience is consistently inconsistent. And it usually adds an extra step which hurts adoption and ease of use.

Case-in-point: I recently got an important email I’d been waiting for. I eagerly opened it up on my iPhone to see if it had the information I was waiting on.

It did. But it wanted me to scan a QR code so I would be taken to the important details.

How was I supposed to scan a QR code in the body of an email on my mobile device? Why couldn’t they just drop a simple text hyperlink in there that would quickly and easily do the job?

Instead, I had to close my email. Download a QR code reader from the app store. Go start my laptop computer so I could scan the email now.

Extra steps. Extra hassle. Extra time. When there was a perfectly good alternative they could have used instead.

When You Should Chase Rainbows & Shiny New Objects

Only chase rainbows if you’re done planting and tending to your crops.

It’s very possible to double your revenue in the next year without ever using a single QR code.

But the same can’t be said for content creation, SEO, or email marketing. So go back to the fundamentals and make sure you’re getting those right.

Got a little time or money to gamble with?

Then try new distribution channels for your content and or other lead acquisition channels like inexpensive social advertising.

Now go ahead and chase a few rainbows. Why not? It’s fun!

But don’t expect it to significantly impact your business.

Because it rarely does.