They say you learn something new everyday…

And one of the things I recently learned was a new oxymoron: a social media budget.

Because in most companies, it simply doesn’t exist.

They expect Fans, Followers, Likes and Pins to fall from the sky.

But that’s not the worst part…

No, the worst part is when you see how companies actually spend a social media budget.

Because most of the time it’s wasted on vanity metrics and hot trends.

Here are three of the worst ways that companies waste money in social media. 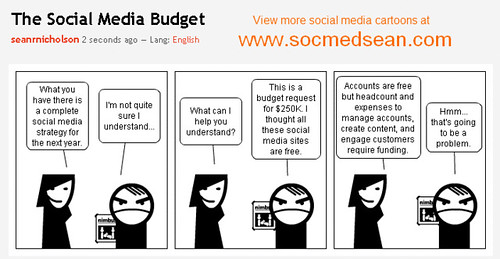 One of the best ways to grow a social network is to funnel people from existing sources.

That could mean your existing website traffic or email database. Or it could simply mean your foot-traffic and other offline sources.

This is the best source of visibility and awareness most companies have. But by overlooking a few key principles, they’re wasting time, energy, effort and money.

For example, the typical offline, social media call-to-action (CTA) usually looks like this: 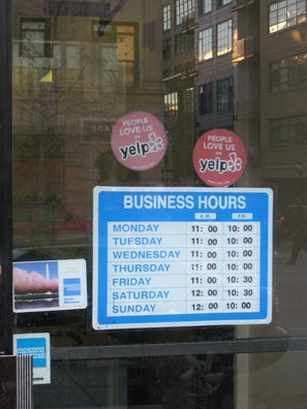 In this case, all you’re doing is promoting Yelp (and cluttering up your window). There’s no CTA, and no customer benefit.

And this problem isn’t isolated to small mom-and-pop shops either.

Large corporations and big ad agencies do this all the time on commercials. Next time you’re interrupted during your favorite show, count how many commercials show a Facebook icon, and… nothing else.

No Facebook page URL, no direct call-to-action, and no reason or incentive to actually get-off-the-couch and take action.

Now compare this to a good example from a paper receipt: 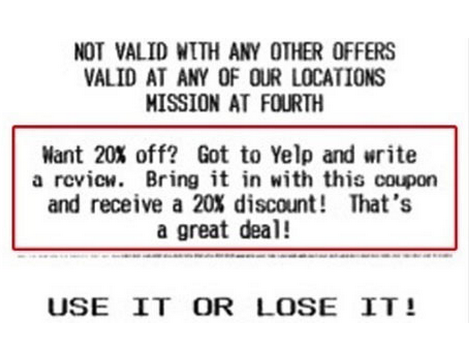 It has an extremely clear call-to-action, and a compelling reason to take action.

Now think about how powerful this is…

Customers are MUCH more likely to leave a negative review on Yelp than a positive one. But if you can incentivize people after a good experience, than you start to really harness the potential of customer-generated marketing.

“The average, large company in the US has 178 corporate-owned social media accounts”, according to Marketing Pilgrim.

Exactly who in your organization is responsible for managing 178 different social media accounts? Who’s going to create new content for each, and respond to customers in a timely fashion?

The cost associated with proper community management is significant. And for 178 different accounts, it’s astronomical.

But that’s not even the worst part…

You’re also completely confusing your customers. Which accounts are they supposed to follow or interact with? Who do they respond to with general questions, product support, or service follow-up?

Countless psychological studies have shown that when people are presented with too many options, they freeze up and don’t make a decision.

So they give-up completely, and are left with a bad taste in their mouth.

Or instead of working through their customer support issues, they go trash your business on Yelp.

It’s been said that the definition of insanity is doing the same thing repeatedly but expecting different results. Keep that in mind as you read the next few lines…

In the early 1990s, America Online (AOL) spent over $300 million in mailing CDs to everyone’s mailbox. According to then CMO, Jan Brandt:

At one point, 50% of the CD’s produced worldwide had an AOL logo on it. We were logging in new subscribers at the rate of one every six seconds.

In a decade, AOL rose to over 25 million users — an unbelievable number at the time. They were the hottest company in the world. And they began opening up new opportunities for brands to reach consumers.

Companies raced to build up their AOL brand pages, and you would see “AOL” all over the commercials.

But eventually it fell out of favor (like every social network since), and lost users in droves. Those huge marketing investments companies made into AOL was wasted — because it was a “closed system”. All the data and user information belonged to AOL, not the companies who worked so hard to build it in the first place.

Today, we have the same exact thing going on with Facebook.

Companies love talking about “Likes” and promoting their pages where-ever they can. But here’s the problem…

Facebook is starting to double-tax you to reach your own fans. According to the NY Observer,

“Facebook acknowledged it as recently as last week: messages now reach, on average, just 15 percent of an account’s fans. In a wonderful coincidence, Facebook has rolled out a solution for this problem: Pay them for better access.”

“As their advertising head, Gokul Rajaram, explained, if you want to speak to the other 80 to 85 percent of people who signed up to hear from you, “sponsoring posts is important.”

So if you want to reach more of your own fans — the ones you already spent time, money and energy acquiring in the first place — you have to PAY AGAIN with advertising.

That doesn’t seem very logical, does it?

Getting referral traffic from Facebook is great. And using it to reach new people, while also increasing engagement and retaining customers is good too.

But don’t throw a lot of money down the drain by investing in a closed system that you don’t own or control.

Because social media has changed the medium — not the principles.