If you want to grow your company, then you’ll need to get more new customers.

And online, you can reach anyone, anywhere, at anytime in the world. That’s a HUGE opportunity.

But here’s the thing…

The average website’s conversion rate for new sales is only around 1%.

So… what does that mean?

Open up your website analytics, and see how much traffic you’re getting on a monthly basis. Then multiply that number by 1%.

That’s how many new customers you can expect realistically on a monthly basis. Now multiply that by your average sales price, and you have at least a basic view of expected sales.

The lesson here? If you want to grow your business, and tap online marketing to fuel it, then you’ll almost always need more traffic. But not just any traffic. You need qualified, targeted traffic that will stick around and show interest in what you’re selling.

And the best source of targeted traffic is through SEO.

But like most valuable things in life… SEO isn’t easy. It’s technically difficult, constantly evolving, and it takes a lot of time and energy to learn.

So how do you get good at SEO, and use it to grow your business?

I was initially on crutches for a full three months. And then the first surgery re-attached my LCL and hamstring with a dissolvable anchor on the outside of my knee. Then I had to rehab my knee for a full six months before going under for a second surgery to repair ACL.

I went from playing college soccer, in the top echelon of athletes in the states, to… learning how to walk again (twice).

Unfortunately, ACL injuries are fairly common among soccer players. And one of the biggest problems with these injuries is the cost.

Then you have also sport-related problems, such as the loss of your season, loss of scholarships, being excluded from team activities, getting cut from rosters, and the increased likelihood of more injuries (if) you return.

Lastly, there are mental and long-term issues such as chronic knee problems, mild-depression like symptoms and the increase of osteoarthritis later in life.

And here’s a common misconception about ACL injuries…

Length of recovery has little to do with strength or hard work, it has everything to do with your body’s ability to deal with trauma and “accept” the foreign ACL.

Usually people tear their ACL a second (or third) time because they rush back too quickly, when the integrity of the foreign ACL hasn’t solidified or matured.

How to Achieve Sustainable, Long-Term Success When Starting from Ground Zero

The recommended time length for ACL recovery is somewhere between 6 and 12 months, depending on a wide range of factors.

Most competitive athletes (myself included) try to cut this rehab short. In 1997, Jerry Rice (NFL wide receiver) made a 3 ½ month comeback after ACL reconstruction, only to fracture his knee cap (where the ACL was taken from) ending his season.

After my second surgery, I went through a full year of rehab before being cleared to play. It took a full 18 months before I even stepped foot back on a field.

But almost exactly 24 months after originally getting injured, I played in the National Championship Final and then went on to finish my soccer career without any further ACL problems (and still none to this day).

My recovery was unique, because most people in my situation either get hurt again, or stop playing altogether.

But anyone could have done it.

Here are four ways to achieve long-term success in anything:

And this last one is where most people slip up…

We all want to make more money.

Whether that means growing your business, or charging a higher hourly rate.

Because money equals freedom. The freedom to do what we love (and not what we have to), to travel, to have more free time, and have less stress.

Time and time again, it’s been proven that stress can kill.

And it’s also been proven that people with more money and control over their future have less stress. (So having more money also equals a happier, longer life!)

Online, you see people promise quick riches and instant results all the time.

Sorry to burst your bubble… but it’s not true.

You want to use online marketing to grow your company and make more money? It’s incredibly difficult. And it takes A LOT of time, energy and money. (It’s not impossible… there’s just no shortcuts.)

One of the best examples of promising quick results in the online marketing world is in SEO. Because SEO is the single best source of traffic for new customers.

So you buy some links, use shady software to spin nonsensical articles, and expect… what exactly?

Do you really think that’s going to outsmart Google?

A billion dollar company, and one of the smartest, most innovate companies in the history of mankind. A company that’s creating futuristic, artificial intelligence products like “augmented-reality” glasses and a driverless car.

So how do you get better at SEO?

How do I know this? 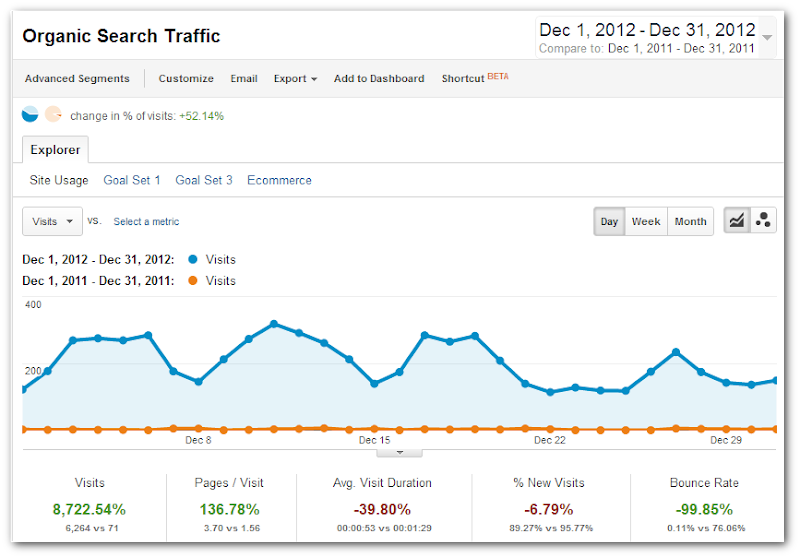 No tricks. No gimmicks. No manipulation.

I can do it for you.