Why “Going Viral” Is a Myth

On October 1th, 2002, Felix Baumgartner jumped from a plane 24-miles above our planet.

And all of them sat and watched as the Red Bull logo was splashed across their screens again and again during the jump which was named the Red Bull Stratus Mission.

All for only a reported $65 million. 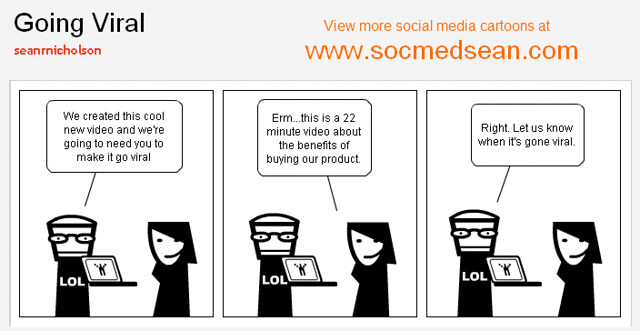 Why True Virality is Incredibly Rare

Social media enables people to spread your message faster, further, and easier than ever before.

That’s great for “word-of-mouth”, and exposing your brand to new people. But it’s not enough.

For a company or website to grow organically through elusive “viral growth”, you need a viral coefficient of greater than one. That means each new customer you get has to be generated by one of your existing customers.

In theory this is the perfect marketing plan. But in reality, it’s nearly impossible.

Only a few companies have been successful at it, and most are software or technology companies like Facebook, Dropbox, and YouTube. Chances are, your business doesn’t have strong enough network effects, and isn’t revolutionary enough to achieve sustainable, profitable growth through pure viral marketing.

Otherwise, you need to have such an awe-inspiring event or campaign that’s so remarkable people will naturally talk about it. How do you do this? Spend $65 million and drop a human from space.

If you don’t happen to have a spare $65 million laying around, then here’s what you should do instead.

Most “viral” campaigns are actually “seeded” to a big enough audience to eventually cause a tipping point.

One of the best ways is to “seed” a campaign is through business development.

Identify larger communities, media properties, and influential people that also cater to your target audience. Then you partner with them by providing something they don’t have, in exchange for something they do have (e.g. eyeballs).

It’s not easy. But there’s good news. What you’re promoting is usually more important than who’s promoting it.

Next it’s time to pour on the extra effort. So determine how many people you want to reach, how you’re going to reach them, and how much it’s going to cost.

Most viral campaigns have no opt-in required, because they’re more for awareness, branding, and social activity. But it’s easy to make this investment now that you have some idea of a minimum reach due to your “seeding” efforts.

Last but not least, why should someone share or refer something? What’s in it for them?

It usually starts with how appealing your “thing” (i.e. the product, campaign, infographic, tool, asset) is to your target audience. How useful, interesting or moving.

Then it needs to benefit them more by sharing or recommending it. This is incredibly difficult in reality. But it could give them money for promoting it (like a revenue share), or peace of mind knowing that they’re helping someone else with a common problem.

Or it simply could just give them momentary recognition. Most social butterflies online are narcissistic. (Harsh, but true.) So make them the center of your marketing campaign.

True virality is incredibly rare. And it’s usually limited to a small subset of software or technology companies.

For you and me, things don’t usually just “take off” on their own. And waiting for something like that to happen is a terrible way to market your company.

It’s very possible to cause a ripple effect for your next campaign. But in most cases, you have to engineer it from the start. And you have to invest serious time, energy, and money if you want to see the payoff.