SERPs are getting more competitive, not less.

And three trends are at the heart of transforming them into winner-take-all markets, where only the best of the best gets seen, clicked, or shared.

In this article we’ll break down exactly why that’s happening, and why ‘good’ SaaS content marketing is no longer good enough.

Web design trends show that people can and will scroll to find more information. The ‘fold’ isn’t as important as it once was.

Unfortunately, the same can’t be said for SERPs.

A decade ago, the top five results in Google received the lion’s share of clicks.

The top five results on the very first page still receive ~90%+ of interactions. Across the world. Across all devices.

Less than 5% of people bother with 5+. That means even the first page isn’t good enough anymore. SEO strategy has become tougher than ever.

That graph ain’t no bell curve.

The SERP’s richest continue to get richer, too.

But that’s not even the worst part.

“What about mobile?!” you exclaim. You know, the mobile-first index and all that. 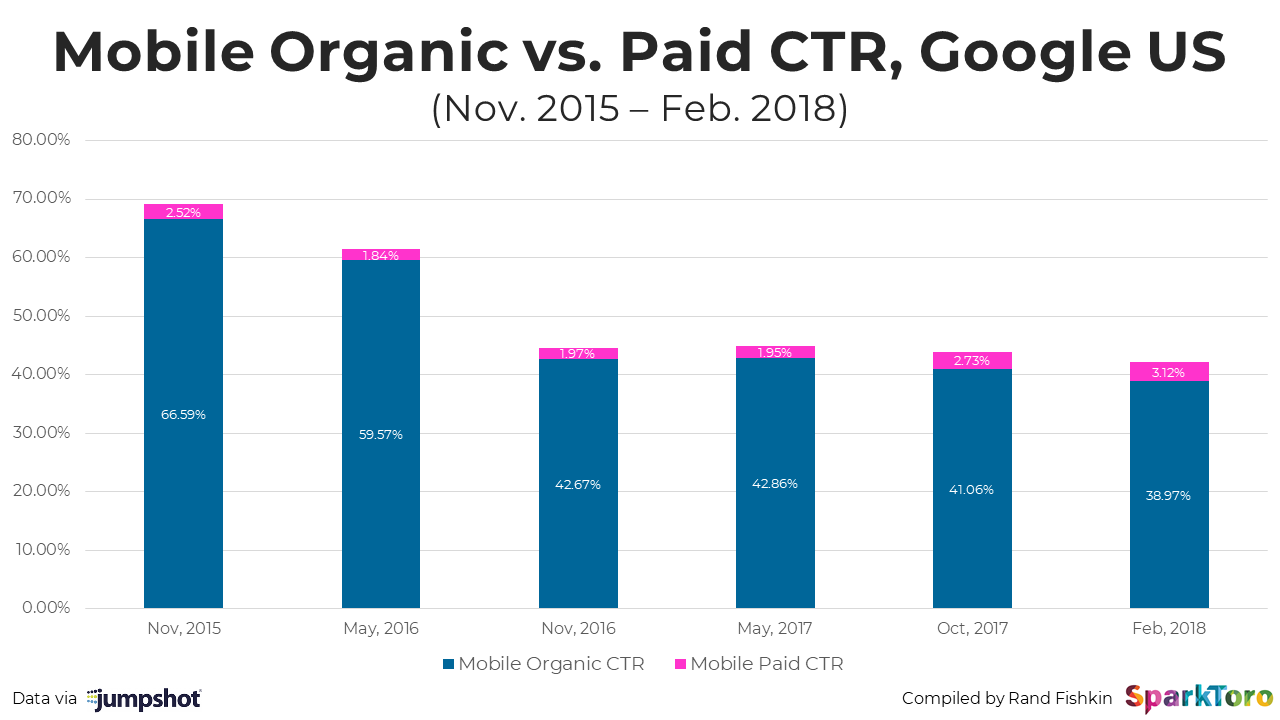 In just the last three years, organic CTR has fallen like a rock. Even paid CTR is growing! (I’ll show you one reason for this below.)

Good for ads. Not so great for the content marketer.

When it comes to SaaS content marketing, being 5+ on a competitive keyword isn’t good enough when you ultimately receive 0% of the eyeballs.

Already with the bad news. And we’re just getting started.

We used to live in a world devoid of quality content. Of options.

Those days are long gone. Now every business owner is trying to create content. Every business is on social media. The world’s biggest Saas companies are obsessed with content creation and inbound marketing as a source of lead generation.

“Content shock” refers to what happens when only the top 1% of 1% gets seen.

The problem is the Law of Shitty Clickthroughs.

In the early days of SaaS content marketing, things work stupendously well. Even average stuff got noticed. You and I both could name a dozen bloggers off the top of our heads who’re basically famous for being famous. They really just rode the early content marketing wave.

However, things don’t quite work out so swimmingly when we’ve passed saturation. Digital marketing and especially inbound marketing has changed all that. Forever.

Thus, the Law of Shitty Clickthroughs:

Over time, the results from all tactics fade.

Nowhere is this clearer than Andrew Chen’s display ad example:

The problem isn’t just quantity, though. I wish it were.

The problem is quality.

Take marketing. Like most online echo chambers, everyone chases the same few true high-volume keyphrases. Otherwise, you have to fight over the remaining scraps.

And yet the competition for those phrases? Insanely tough.

Even the low volume ones.

Take the SERPs for “international SEO” as an example: If this is what you’re up against… why bother?

You’re fighting a losing battle. Unless you got a dolla make me holla like Honey Boo Boo. Or unless you’re on top of your shit.

Salesforce was one of the first true SaaS companies, founded in 1999.

In less than two decades, there are already over an estimated 50,000+ SaaS companies. With another 25k forecasted in just two years trying to peddle a SaaS product.

So competition — in aggregate — is only getting more intense for those hoping to start at SaaS company. The bar keeps rising, and every day you’re competing against exponentially more people.

Like a bad zombie movie you can’t wake up from.

(Prepare yourself. They are coming.)

Time for some good news?

Because this is the most troubling trend of all.

But Google is also worsening the odds from 3/2 Blackjack to 6/5. Same game, more or less. Significantly fewer chances for success, even for established Saas companies.

This seemingly-innocent rule change increases the house edge by a few percentage points.

Even when you’re winning, you’re losing. Each pot you take home is significantly smaller. So that over time, more of your hard-earned dough ends up in the dealer’s pocket.

WTF does this have to do with SERPs or SaaS content marketing strategy?

The Knowledge Graph first debuted only a few years ago. It started answering people’s questions, without making them click on a result to find the answer.

These ‘instant answers’ are beginning to consume today’s SERPs at an astonishing clip. They are scooping up the attention of your target audience.

One study says that 40% of search results end without a single click. Meaning someone got their answer, directly from Google, without checking out your hard-earned Skyscraper.

That number will only continue to nose dive off a cliff thanks to zero-result SERPs. 51% of 10,000 SERPs had less than the business-as-usual ten organic results. 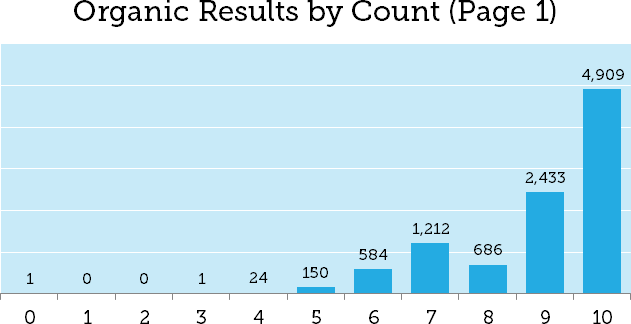 And we shouldn’t be surprised, seeing how this has been Google’s objective numero uno since Day 1.

That’s not to suggest that SEO is any less important. Far from it. Amazon = SEO. Voice search = SEO.

But this, on the back of the first two trends, does signal an increasingly-critical concept:

There are too many hurdles. Too many alternatives. Too many ‘rigged’ games. Even content promotion can’t guarantee you’ll reach your target audience or potential customer.

Which means ‘good’ SaaS content — you know, the stuff that gets ranked and clicked and linked — isn’t good enough anymore.

Anything that can be commoditized, will. Especially in hyper-competitive markets.

The average stuff will languish in obscurity. People are overwhelmed (and sick to death) of yet another SaaS blog post. Yet another pop up. Yet another email newsletter.

There’s no barrier to entry online. That means anyone, anywhere, can keep smashing “Publish” like a tweaked-out crackfiend until they pass out somewhere in an alley. Today this is what qualifies as a content marketing strategy.

But if it’s not amazing or unique or controversial… don’t bother. Because the odds are literally stacked against you in almost every way possible. Even educational content will find it hard to stand out or drive results for a SaaS brand.

All of this spells the end of shit like this:

Your ass will get handed to you.

Don’t take my word for it.

We bought and tested five content writing services. (Long story short, they were all bad.)

“You get what you pay for: Pay rates and level of experience are correlated.”

I can already hear the SEO nerds:

“It was no surprise to find that writers with more experience, who charged more, were overwhelmingly better than cheaper, less experienced writers.”

Why does this matter?

Because “Professional” and “Expert” writers won’t even lift a pen (or tap a keyboard) for anything less than $0.25 word, and routinely charge in excess of even $1.00/word.

Pay rates are even more exacerbated in the tech industry.

You should read that entire study. But here are some Cliff Notes if you’re short on time (or work in the tech industry, and therefore suffer from the obligatory ADHD):

What does this mean?

But for everyone else?

No chance. You’re fighting an uphill battle. Where only the excellent gets noticed.

I was going to put together an eloquent-yet-offensive wrap up to this. But once again, ClearVoice already beat me to the punch.

So brand marketers? Peep this:

Top content — the kind that gets ranked, viewed, shared, and upvoted — requires top writers. SaaS marketing won’t work without them.

Plus, they’re the only logical way out for SaaS companies who need to acquire customers at scale for the lowest cost per lead possible (read: all of them).

Not when the first five SERP positions get almost all of the attention. Not when the competition seemingly doubles every single night. And not when the company monopolizing SERPs gets to decide your odds.

Not in a winner-take-all market.